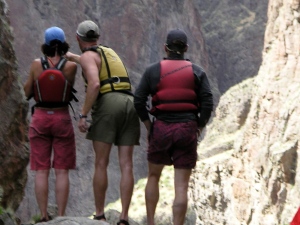 Since reducing my household from 4 to 2, I have seen my grocery bill cut by more than 50%. Jim ate a lot. He ate constantly. He liked variety. 6 jars of jam would never have survived long enough to go moldy. Perhaps because he ate so much, or perhaps due to just luck of metabolism, Jim also pooped a lot. He pooped at least 3 times before leaving for work in the morning. I’m sure it was not a mistake that his classroom was just across the hall from the restroom, and he probably forgot occasionally to turn off his microphone. The kids and I learned that, “hurry up and get in the car” really meant “clear out of the bathroom, I’ll be there in 5”. Jim had to poop every time he scouted a rapid. The best gift ever given to him was his own private box to carry, always accessible, on his boat. Jim carried a little orange shovel in his camel back. I do wonder how the vegetation on Moscow mountain will fare without his steady fertilization. The hardest thing for Jim to deal with during chemo was his gut. He rarely got nauseated, but if he hadn’t pooped at least twice by 10 am, he was miserable. Jim never met an outhouse he did not like, and he always knew where the closest one was. 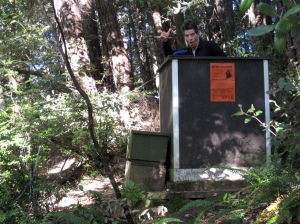 At Jim’s memorial, the kids and I decided that “in lieu of gifts or flowers” that we would set up a fund with Palouse Clearwater Environmental Institute. PCEI is our local citizen driven environmental group. They organize stream clean up every year, and have planted literally thousands of trees and shrubs to help restore stream banks in and around Moscow. They work with the local schools on environmental education and kept my daughter out of trouble her senior year when she helped organize their plate project. They moved into their current location, from a teeny office in downtown to their campus on the north side of Moscow in 2004. Slowly and steadily, they have made improvements to the land and buildings and their programs have grown exponentially.  It would take a book to describe all that they do..so instead I am giving you their website address so you can look for yourself. It is in the blog roll, or if that is too confusing, just cut and paste: http://www.pcei.org.

So, a few months after Jim’s death, and about $5000 later, the director of PCEI asked to meet with me to determine a project with Jim’s name on it. I thought about a weather station, I thought about a park bench, I thought about some sort of educational scholarship…and then Tom had a suggestion. “We really need to expand our toilet facilities for all the groups that are now attending our campus. How about the ‘Jim LaFortune Memorial Composting Pooper’?” PERFECT! Meetings followed. Design and budget. Pre-fab was too expensive. Could we showcase sustainable building practices (RASTRA construction), rainwater catchment, accessible facilities? Volunteers started popping up. We should have a 1st draft drawing within a week. It will be a 2 room facility…one side for Jim, and one side for everyone else. 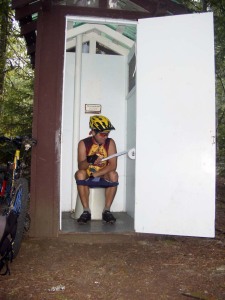 The PCEI board approved our design and budget. Pre-fab was $75,000, we are thinking it can be done for $35,000. The board wants it done by October 28th for their Animals of the Night event. There is now $5695 from 63 gifts in the fund. Now here is the magic! We have an anonymous donor that is willing to match any funds that come in from March 1st until April 15th, 2011 up to $10,000. If we can raise that amount, it will put us within spitting (or, should I say pooping?) distance of our goal. I am asking my readers to please help spread the word. It is very easy to donate. Just go to the website, click on “Jim LaFortune Memorial” in the upper left corner, and fill in the blanks. If folks are more comfortable with mailing or calling, the contact information is on the website.

I am very excited about this project (in case you can’t tell). This community has been so generous to our family in our time of grief. If you ever asked Jim what he wanted to be when he grew up, he would say, “I won’t grow up, but if I do, I’d like to be a philanthropist.” A composting toilet facility isn’t a huge ongoing endowment. It is small poop in the grand scheme of things. But, it is a little. It is what we can do. It is enough. Emerald put it so well when she said, “I can’t wait to go to the groover at PCEI and think about my dad”.

This entry was posted in Uncategorized and tagged composting toilet, memorial, PCEI, poop. Bookmark the permalink.

2 Responses to Pennies for Poop

Journal of a Not So Serious Western Woman

Learn. Love. Listen. Laugh. Make it through life with a full heart, a sense of humor and a lot more stories